The Royal Lane Baptist Church music ministry provides worship music for Sunday morning worship and for other special services throughout the liturgical year. Besides singing the choral anthem, many of our choir members enhance the worship experience by singing solos, duets, or in small ensembles.

The full (SATB) Adult Choir rehearses Wednesday nights at 7:15 PM in the sanctuary choir loft. Our worship music is accompanied by staff musicians. The choir officers, elected each November, help by contacting members, keeping the library organized, and coordinating special events. Any adult who wishes to sing and can attend Wednesday night rehearsals is welcome to become a member. 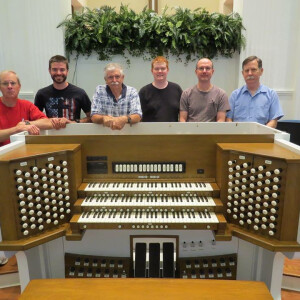 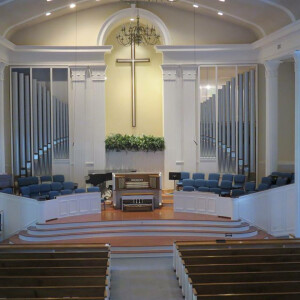 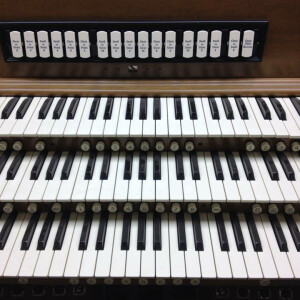 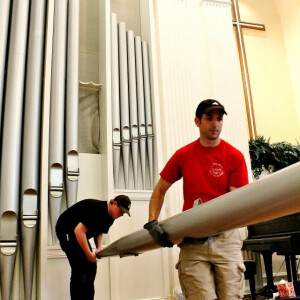 The new instrument for Royal Lane Baptist Church was completed in late 2016 and incorporates 50 ranks of pipework and 7 digital voices.  The instrument was designed according to the specifications of Danny Ray, the organist at Royal Lane, with input from Dan Garland.  The design, building, and installation of this instrument was challenging due to the extremely small size and shape of the organ chambers.  There are many compound angles and varying ceiling heights.  The Great and Choir are in the right chamber and the Swell is in the left.  In both chambers the main windchests are installed one above the other to take advantage of the ceiling height.  Without doing so it would not have been possible to fit the instrument in these chambers. The Choir and Swell are expressive, Great and Pedal are unenclosed.  The expression shutters are 2” thick with 16 stage motors.  Having thick shutters and plaster walls allows for enhanced expression. A majority of the organ uses electric action, including all the main chests.  The large pedal pipes and high pressure reeds use electro-pneumatic windchests.  Electric action was chosen because it allows windchests to have a compact design in order to fit the small space, as well as allowing for unification within the stop list.   This discrete unification allows more flexibility in the use of the instrument both for worship and performance. The previous instrument possessed some excellent pipework so 14 ranks were incorporated into the new specification.  This pipework was completely re-voiced and in some cases re-scaled.  The digital voices include the Chimes, Harp, and Hand Bells (a first for us) and the large stops in the Pedal.  We avoid the use of digital voices with the exception of percussion whenever possible.  At Royal Lane with small chambers there was no possibility of installing pipework in place of the digital voices.  These voices greatly enhance the tonal ensemble adding to the excitement and flexibility of the instrument.

The instrument is American eclectic in design leaning toward English.   Each division contains a complete Principal chorus with an abundance of foundation stops.  Mixture scaling and composition was completed with great care to ensure proper relation to the Principal chorus and to add brilliance to the ensemble.  The Bombarde 16’ 13-85 in the Pedal is of generous scale and pressure incorporating English shallots.  It is located in the Choir enclosure so it is useful as a solo stop, a chorus reed for the Great, and the primary Bombarde in the Pedal.

The Salicional 16’ in the Swell was a firm request from Danny Ray, a request for which I am very grateful.  Its timbre is similar to an orchestral cello providing a gentle “point” to the 16’ pitch in the Pedal when used in conjunction with any of the three sets of strings.  An extremely unusual stop found in the Swell division is the Harmonic Doppelflute.  Its inclusion in this instrument is quite unusual having traveled an interesting path.  The original specification called for a 4’ Wood Concert Flute in the Great division to serve as the 4’ flute in the ensemble.   This stop was to come from our stock.  While searching I found this set of pipes that had been in storage for decades.  The pipework was built by Hook and Hastings in 1915 for First Christian Church in Fort Worth.  After listening to these pipes in the voicing room in our shop we realized they were simply extraordinary.  The tone produced by this pipework truly sounded like an orchestral flute.  The pipework was refinished and placed in the Great division as the 4’ Flute.  During the final voicing process for the instrument on site at Royal Lane it became apparent that this stop needed to be moved within the instrument.  The Great already had a large metal 8’ Harmonic Flute and the Doppelflute however wonderful it was did not work as an ensemble flute.  It needed to be in an expressive division to have control over its volume and allow the performer to dialogue between the two Harmonic Flutes.  Normally the Choir division would be the best placement for this stop.  Unfortunately space restrictions made this impossible, therefore the stop found its home in the Swell.  A Flute d Amour was installed in the Great.

The Orchestral Oboe in the Swell is capped, the Bassoon is open with a half length bottom octave and the Harmonic Trumpet is large scale with English Shallots.  The full reed chorus   provides a solid reed ensemble in the Swell division.

An unusual stop in the Choir division is the 8’ Vox Angelica II.  These two ranks are of extremely small scale and are enclosed in a box within the Choir division.  When the Choir shutters are closed they almost disappear.  I was once informed that an organ should have the ability to be so soft one must hold their breath to hear it.  With these stops, that goal was accomplished.

We were informed early on that there would be a Trompette Royal installed in the Gallery.

This is a large scale English stop playing on 10” wind pressure.  It appears that it is sitting on the cove, actually it is held in place with large steel brackets bolted to the rear wall.  The cove provided no structure.  The two columns on either side of the oval window were added during the installation.  The column on the left is actually a wind trunk providing wind for the Trompette from the blower and reservoir located beneath the Gallery rear riser.  The column on the right has no function except for visual balance.

At the request of the church the existing façade pipework and casework circa 1980 was not changed in order to have ample funds to complete the instrument as designed.  This pipework was re-voiced and re-regulated.  It is the desire of the organ-builder that in the future these pipes be replaced with tin or polished zinc and the casework be enhanced with pipe shades mirroring architectural elements found within the Sanctuary.

The control system and combination action for the instrument was provided by Peterson Electro-Musical Products, Inc.  It is their ICS 4000 system featuring multiple memory levels, programmable Crescendos, Sequencer, and record/playback.

It is the strong desire of the organ-builder that this instrument will be an important addition and asset to Royal Lane Church and also to the musical community in Dallas.  During the entire process of creating this instrument we reminded ourselves that its primary purpose is to aid in the worship of God.  This is our call, this is our purpose.  We feel blessed to have been given the opportunity to build such an instrument.